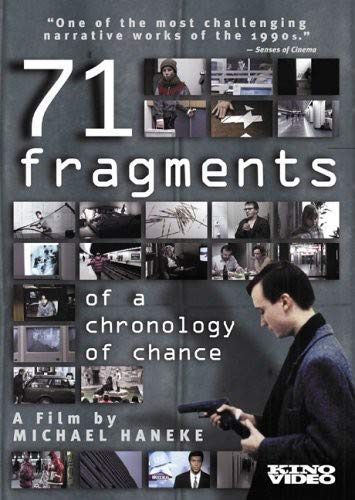 A meticulous depiction of the numbing and normalizing effects of television, Michael Haneke's 71 Fragments of a Chronology of Chance (1994) "is the most intelligent and powerful study by cinema" (Maximilian Le Cain, Senses of Cinema) of the 20th century's quintessential medium. A "cool, cerebral and painstaking" (Time Out London) examination of several characters, including an Austrian university student who goes on a shooting spree, the third installment of Haneke's "glaciation trilogy" is a mosaic of 71 film tableaux - beautifully shot by cinematographer Christian Berger (Cache and The Piano Teacher). In 71 Fragments, clips of TV news segments on warfare in the former Yugoslavia alternate between stories of urban disconnection. And while continuing to approach filmmaking from an anti-psychological perspective, German-born Haneke assembles a unified work from snippets of narrative, such as Inge (Anne Bennet) and Paul Brunner (Udo Samel) struggling with a newly adopted daughter, and a homeless Romanian boy wandering the streets of Vienna. Moreover, and as expected from Haneke, 71 Fragments closes with an unforgettable cinematic punch, which also stands as a presage of his "later masterpieces by virtue of both its style and thematic core" (Adam Bingham, Senses of Cinema).

German-Austrian director Michael Haneke's experimental feature film, "i"71 Fragments: A Chronology of Chance, explores the bleak, disjointed lives of several people only to tie them together at the end, during a tragic, violent climax. Five-to-ten minute segments, spliced together, unravel fractured narratives from ten sets of people, ranging from a couple frustrated by their newly-adopted girl, to a daughter who, to spite her aging father, prevents him from spending time with his granddaughter, to a young runaway who survives German winters in subway stations, stealing and panhandling for food, cigarettes, and comic books. Between these narratives, real news footage reporting on Yugoslavian and Turkish wars, and the Michael Jackson molestation trial, makes the world within the film even larger and colder. ItÂs as if Haneke made ten movies, chopped the films into short strips, and edited them back together like Frankenstein, opting for ambience instead of plot. Full of characters who are "sorry that they exist," "i"71 Fragments contains little of the actual violence that viewers sometimes loathe in HanekeÂs work. In an interview included in the extras, Haneke says of this third film in his "glaciation" trilogy, that "i"71 Fragments: A Chronology of Chance documents failed communication. That said, this film meditates on human isolation by distilling violence down into one chilling, final action, feeling more like a cry for help than a wish to separate further from humanity. "i"ÂTrinie Dalton

Donate to the SVS PAC

The SVS Political Action Committee (PAC) works for vascular surgeons, and only vascular surgeons, to ensure that SVS members get access to U.S. Representatives and Senators in order to discuss issues that have a major impact on members and their practices.

For Patients: Learn About Your Vascular Health

Yes, Dr. Virginia - There is an SVSConnect app

The SVSConnect online community is not just for your desktop - the mobile app is also available and easy to use from your phone or tablet.

Search "Member Centric" in either the App Store or Google Play and download. Then log in with your SVS credentials and join the conversation.

Your colleagues are never far away!

What patients and families must know about vascular disease

A donation to the SVS Political Action Committee is an investment in the future of our profession.

Learn about the SVS Foundation’s expanded mission and make a contribution today!